F**k all in common

Iain Anderson embodies the saying that if you want something done, ask a busy person.

On learning that he’d just written a book, ‘F**k Business The Business of Brexit’, I tweeted Iain, asking if he could spare a review copy. A brace turned up by return of post.

Anderson is founder and chairman of Cicero, the UK’s largest independent lobbying firm. He’s also a life-long Conservative Party member, fond of ‘nattering’ (his word) and, in recent months, has rarely been off the airwaves: BBC Question Time; Sky News; you name it. If CBeebies has a business slot, he’ll have made an appearance.

There was a time, when he would have been on the other side of the microphone. Indeed, our paths first crossed as journalists covering similar financial beats in the Nineties.

Which brings me back to F**k Business (not literally, you understand). Should you need reminding, the provocative title reflects a remark the now Prime Minister, Boris Johnson, is supposed to have uttered during his time as Foreign Secretary. 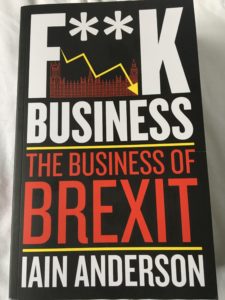 In the book, Anderson attempts to explain how and why the relationship between government and business has broken down in recent years. “A large part of the reason why it [business] has been shut out of the debates… is a direct result of the financial crisis, excessive executive pay and the impact of austerity,” he writes.

Since the 2016 referendum, Brexit’s omnipresence has ensured the crack’s become a chasm.

Plenty of journalists who’ve written about the Square Mile down the years have moved into public relations and corporate affairs. Even yours truly has had to decline occasional approaches on this front from financial institutions (staggering to believe, I agree).

To many outsiders, however, the world of the lobbyist remains an alien one. Not if you read this book. Featuring big-hitting bosses of financial firms, Whitehall grandees, plus plenty of references to the financial press, you’ll receive an enlightening, ringside view of the way businesses engage (or, at least,  attempt to engage) with the political class.

To cap it all, Anderson puts his old reporting credentials to good use. The book is awash with direct quotes from Cabinet ministers, financiers and journalists alike.

If he was a busy bee before, Anderson will likely be an even busier bee this autumn.

F**k Business The Business Of Brexit. £12.99 published by Biteback Publishing.

Andrew is at the top of his profession and I highly recommend his range of talents to anyone. He works with absolute integrity at all levels and is part of an elite band of top level operators in the financial services industry.  He quite simply ‘gets it’ relentlessly hunting for, and inevitably delivering, that compelling difference to take communications to another level.