Reporting perils of a hospitality pass

Do you remember Eastenders’ Peter “Awight tweacle” Beale? Barrow boy Pete was such a regular down the Queen Vic that his very own beer mug used to hang from a peg in the infamous E20 boozer. 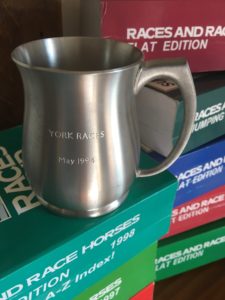 Hospitality pass? Don’t be a mug, come back with a story

The mug was presented to me on this very day 25 years ago by a company called Homeowners. Homeowners was a friendly society, a ‘mutual’ financial services organisation owned by its customers and therefore similar in set-up to your average building society.

In my capacity as a magazine editor, it had whisked me north to the Knavesmire to watch the Dante Stakes, a famous race the company sponsored at the time. A horse called Erhaab prevailed who also went on to triumph in the Epsom Derby the following month.

Why on Earth am I telling you this?

Because, as the ‘Summer Season’ hits full-tilt (think Chelsea Flower Show, Royal Ascot, Henley, et al), there’s no better moment to revisit the knotty subject of corporate hospitality and its relationship with the financial press.

For some, Financial Times journalists for example, the relationship is over before it begins. The newspaper’s policy prevents its writers accepting lavish financial services industry invites and I believe similar rules apply to employees at Which? Money.

Other media outlets remain a bit more flexible. If a week-long, expenses-paid trip to, say, Hong Kong is now off the cards (jollies like this for financial hacks were de rigueur in the Nineties), an invite to Twickenham for the rugby might still pass muster.

Today’s rules concerning corporate perks (whether applied to the press or financial services professionals) are much clearer than they’ve ever been. Essentially, the City watchdog has never sported a more furrowed brow on the topic.

Back in 2016, the Financial Conduct Authority published its findings on inducements, et al, and subsequent MiFID II rules (aimed at EU-wide investor protection) have developed the subject further.

All of which is marvellous. Probably.

For the record, that trip to York 25 years ago netted me a couple of exclusive stories neither of which were particularly complimentary about my host (quite the opposite, in fact) and which I would never have secured sitting at my London desk.

My personal view on corporate hospitality (and the mantra I’ve always stressed to reporters) has been “if you’re going to accept, fine, but come back with a bloody decent story or don’t bother going”.

The fact is organisers should never view corporate hostility (I use the word advisedly) as a one-way street to be gratefully sucked up by fawning journalists.

Proper reporters ought to see through all that schmaltz, no matter how lavish the setting. If they can’t, it says more about their character than it does their hosts. Putting on any kind of ‘event’ for the press always involves a certain amount of risk on the part of the organisers. Or it should do.

Watching a company’s top brass at play away from their corporate HQ replete with a glass of fizz in their hand can be far more illuminating, for reporting purposes, than sitting in a pre-arranged, anodyne 45-minute meeting.

Who wants to hear a top executive run parrot-fashion through his or her company’s latest results, launch, whatever, flanked by PR minders when the alternative is to scrutinise their behaviour in lax, but potentially more informative, circumstances?

I have known Andrew a long time and each year he chairs the judging panels for the Headlinemoney media awards. Andrew is always professional, knowledgeable and manages to be charming too. He always strives to get a fair result and ensures everyone’s views are heard.