In a state: home truths about journalism and PR 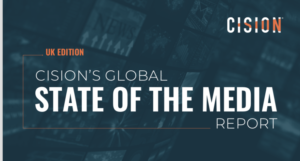 I’ve just had a squint at Cision’s recent ‘Global State of the Media’ report for 2019. The research from the ‘global #EarnedMedia management software company’ included responses from 1,999 journalists in 10 countries.

About 40 per cent of contributors work in print, a third in a combination of broadcast and online roles, with the balance made up by freelancers (about a fifth) and social influencers (4%). I’m not really sure why the thoughts of social influencers should be part of a journalism survey. But there you go.

Some thoughts on those takeaways:

1. I’m sure they are. But – and this may come a surprise to some of you – the concept of a journalist getting his/her hands dirty by working through a pile (or dongle) of data isn’t actually a new phenomenon in the newsroom. What IS ground-breaking is the array of tools now at a writer’s disposal compared with the past. If you need to keep up-to-speed on data journalism, you can do worse than to keep tabs on this section within the journalism.co.uk website.

The little I know about financial services comes from my two-year stint working on Money Management magazine back in the Nineties. Compiling from scratch, processing and analysing two comprehensive surveys a month covering anything from investment trusts to mortgage endowments is pretty good data-crunching practice.

Especially when the magazine back then had near-Bible status for 30,000 financial advisers making decisions for clients. Detailed surveys allowed MM journalists to get under the bonnet to compare and understand product charges, a subject which has always been a hot potato in the financial services market place.

2. If social media’s becoming more challenging for publishers, you can bet your bottom dollar that the same experience is going to apply to providers in whichever sphere you happen to be writing about as well. That’s good news for journalists, isn’t it? Challenges can lead to tensions. Tensions to disagreements. Disagreements to poor decision-making and… bingo! Some tasty news stories for a savvy journalist to mop up.

3. Twas ever thus, surely? Journalists have always faced a lack of resources and no correspondent yet has managed to halt the ticking down of a clock to copy deadline time. What proficient journalists learn to do, however, is get organised and become good at multiple-plate spinning. Whether that’s keeping a batch of tricky stories on the go at once, or planning a raft of clever features to meet all requirements.

If journalism arms you with anything, it’s the most fantastic set of transferable skills including: time-management; becoming adept at trading (you just happen to deal in information, not kettles), delegation (who else can help with this story and make it even better?); and overcoming obstacles (if X won’t talk to me, where can I find Y?).

4. It would be encouraging to think this is true. The fact is the best way for a journalist to keep his or her audience’s trust as high as possible is to produce top-notch, independent, balanced copy. Facts are potent weapons. Use them and let the fake news merchants go stew.

5. Probably the most depressing finding of the quintet. The irony is that this observation could as easily have been made 30 years ago and no amount of technological innovation or improved communication in the interim seems to have improved matters.

Later this summer, media service Headlinemoney will be releasing its own journalist state of the nation survey focusing purely on the financial press. I’m certain the same moan from journalists will crop up there as well about PRs neither knowing their patch very well, nor doing their homework before making an approach.

The only people not to regard findings like these as depressing are those PRs who do take the time to bone up on journalists’ beats and audiences. They’ve been showing their rivals a clean pair of heels for years.

Andrew is ideally placed to help organisations as there are few financial journalists that come close to his breadth of experience and attention to detail. Whether he’s writing, editing, organising events, chairing judging sessions, or inspiring a new generation of financial journalists – all sit as natural skills.