It’s a great honour to be asked back to chair the judging for the 2020 Headlinemoney awards, financial media’s ‘Oscars’ that have now been running for 20 years.

This will be my tenth year in the hot seat with the awards ceremony itself – the UK’s largest annual gathering of the financial press – taking place later this May.

My first encounter with the awards was a little less auspicious. Not as chairman, but back in 2006 as one of the judges.

Schoolboy error
Foolishly, I turned up to a judging session without having done a great deal of preparation thinking I could just wing my contribution on the day. How wrong I was!

The amount of forensic scrutiny my fellow judges had already applied to the various submissions in our category was impressive and left me feeling a bit inadequate.

From that moment onwards I vowed the same would never happen again.

Fast forward to today and I’ve now chaired 300-plus judging pow-wows. Each one’s about an hour long with five judges per awards category. Odd numbers are this chairman’s friend, useful for sorting out close-calls and split-decisions.

I’m not giving anything away by saying sessions often feature robust debate. The judges, leading financial journalists in the main, really care about who receive the trophies. Some turn up with elaborate scoring sheets and sheathes of notes; others go to great lengths to check that supporting statements are accurate (saying a prized story was an exclusive is all well and good but was such a claim actually true?).

Thumbs up
It’s why these gongs are much sought-after. For an independent thumbs up, scroll down to the seventh paragraph in this piece that once appeared in The Guardian.

One of the main differences now compared with the early days is that judges supply their initial scores online in advance rather than on the day. This avoids the need for a lot of on-the-hoof mental arithmetic (bless you, Roger Anderson!). It also gives the judges a starting point from which to make their final choice.

I’m often at pains to stress that it’s not the chairman’s job to decide the results in these sessions. I’m just a referee ensuring fair play. It’s up to the judges to reach the decisions (although if they meet a total impasse I’ll step in and have done so on a handful of occasions over the past decade). 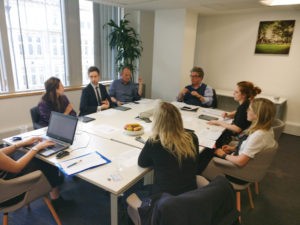 Judges go to great lengths to decide on the eventual winners

Essentially, I’m there simply to give everyone who has made it onto a shortlist a fair hearing and ensure each of the judges have their say before coming up with a result.

Winners and losers
Of course, for every category winner there are four losers and, as you might imagine, some contenders are more disappointed than others at missing out. From time to time, an individual will approach me post-event to find out why he/she didn’t triumph. In these situations, Headlinemoney is happy to share the copious anonymous notes taken from each session concerned.

Only once from those 300-odd sessions has there been a case of what I’d call sour grapes on the part of a disgruntled shortlistee; not a bad return when you think about it.

Oh well. At least it shows this person cared about their work. The point, of course, is that we all care very much about these awards. To repeat a classic refrain, the “judges’ decision is final”!

Andrew is one of the best connected, best informed, hardest working and most influential people in financial journalism today. That would be annoying if it wasn’t for the fact that he’s also such a nice guy.