This was a result of wealth manager St James’s Place’s decision to terminate its £3.5bn relationship with the fund manager. At a stroke this wiped out 40 per cent of the entire assets under Woodford’s management.

Thanks to recent events, his reputation as one of the UK’s most successful investors is in danger not just of being blown to smithereens, so much as totally and utterly annihilated.

As you’d expect, the financial media has gone into overdrive analysing Woodford’s fall from grace. Writing in the Financial Times today, Merryn Somerset Webb describes the current state of affairs as a “saga of mission creep, arrogance and ego”.

Ouch. I hope tin hats are in abundance at the fund manager’s Oxfordshire base. There’s doubtless more of this to come. 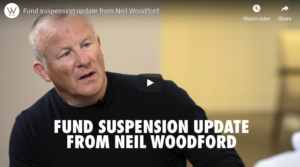 Redemptions were suspended from Woodford’s Equity Income fund on Monday this week. Not long afterwards, the share price of fund supermarket Hargreaves Lansdown took a tumble thanks to collateral damage on the back of the announcement.

With an army of retail investors on its books, Hargreaves Lansdown has long been a promoter of Woodford’s funds; a fact not lost on various financial journalists in recent days.

Writing in Wednesday’s Daily Mail, money editor Victoria Bischoff suggested that “Hargreaves Lansdown owed its customers one hell of an apology”. The same day trade title Investment Week reported that Hargreaves Lansdown was waiving its platform fee on the Equity Income fund while withdrawals were suspended.

As a hawk-like watcher of the money pages, in certain respects my interest is drawn more to the Hargreaves Lansdown element of this saga, over the Woodford car crash.

Why’s that? Because although Neil Woodford has appeared in numerous features and interviews, it is Hargreaves Lansdown experts who, for as long as I can remember (and that’s a long time), have cropped up extensively across all channels of the financial press as expert commentators week-in, week-out.

So fêted were the company’s views that research director, Mark Dampier, even had his own weekly investment column in The Independent newspaper.

As far back as the Nineties, company co-founder Peter Hargreaves made himself accessible to financial hacks and was always good for a punchy quote.

He once told me he was “the god of PEPs” a statement with which it was difficult to disagree at the time. For all you youngsters out there, PEPs or personal equity plans, were the fore-runners to today’s individual savings accounts. Hargreaves Lansdown brokered literally shed loads of this business.

That legacy of press comment has not just lived on, but ballooned.

The ‘H’ in financial journalists’ contacts books remains a well-turned page in the knowledge that, when on deadline, a Hargreaves Lansdown spokesperson is able to come to the rescue with a timely quote on a particular subject. Individuals know their stuff and, most importantly, are available for interview at the drop of a hat.

I don’t have any hard-core data. But I’d still have a chunky bet that, if you plotted frequency of expert appearances in the press against different financial services providers over say, the past year, the only company on a par with Hargreaves Lansdown’s dominance is AJ Bell. Coincidentally, also an investment platform.

I first came across AJ Bell compiling, of all things, surveys of self-invested personal pensions (rock ‘n’ roll). Nowadays, the company’s quoted all over the financial press commenting on everything from stock market movements to pensions.

Personally, I have no beef with any financial services provider that’s well-attuned to answering press enquiries and/or coming up with ideas and suggestions for potential coverage.

There are numerous occasions as a journalist when I’ve lined up a smaller company (especially financial advice firms) to seek their views, only to be let down at the last minute. Top tip: that doesn’t do either party much good.

Of course, whether financial journalists should rely on, or make excessive use of, all the offers of help which come their way from a single source is a totally different question. There are times when, as Zammo from Grange Hill once said, you just have to say ‘no’.

On that note, I’d refer you to the 50:50 Project. This is an initiative from the BBC which has successfully been trying to raise the proportion of female contributors appearing in broadcasts covering news, current affairs and topical programmes.

Generally speaking, quota-based attempts at doing anything drive me nuts. What they do have going for them, however, is the chance to review output. Reviewing what you pump out to any audience is important.

The best money editors are those who ensure that neither company X, nor expert Y ever receives dis-proportionate amounts of coverage within their pages at any one time. Lesser editors may get away with it for a while, although that’s a risky approach to keeping an audience satisfied.

I have attended Masterclasses and events organised by Andrew for the last five years. He is a past master at bringing together PRs and journalists in effective and enjoyable ways. He understands the needs of both sides and provides innovative – and mutually beneficial – ways of bringing them together.